The window is streaked with fast falling raindrops as the chive blossoms in my window ledge herb box are battered by the rain. It’s the last day of the Queen’s Diamond Jubilee celebrations – the somberest day of cathedral services and processions, mimicking the weather. A cup of tea steams in front of me and I shudder as my eyes flick from the rain soaked street to the tv – throngs of people line Pall Mall, cheering and waving flags amid bobbing umbrellas as the Queen steps out onto the balcony at Buckingham Palace. She waves, and the crowd erupts.

London has been hijacked for four days of spectacular pomp and celebrations, like only the English can, to celebrate Her Majesty’s 60th year on the throne. And celebrate, London has. The city has been clad in red, blue and white bunting – with street parties, tea parties, 1000 boat flotillas, processions, concerts, trumpeters, firing squads, singing, cheering, and flag waving and heartfelt patriotism across a diverse nation, come rain or shine.

And so this is my Jubilee offering – a cake that epitomises everything that is quintessentially English – light vanilla sponge, summer raspberries and whipped cream.

4 large eggs, weighed in their shells
The weight of the eggs in:
Softened unsalted butter
Caster sugar
1 tsp vanilla extract
Self-raising flour
300ml double cream
1 tsp vanilla extract
4 tbs raspberry jam, with or without seeds
Icing sugar for dusting
Note: I only used 150ml of cream when I made it – and it definitely wasn’t enough – the cream should ooze out of the sides of the cake in a thick layer. 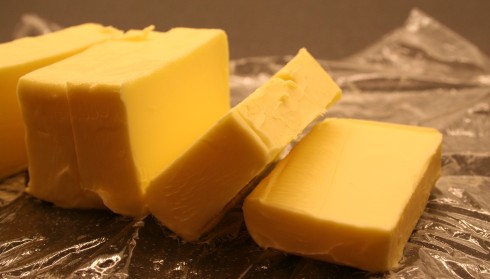 Beat the butter and sugar together until pale and fluffy.

Add one egg at a time, ensuring it is fully incorporated before you add the next one. Add the vanilla extract and beat well. 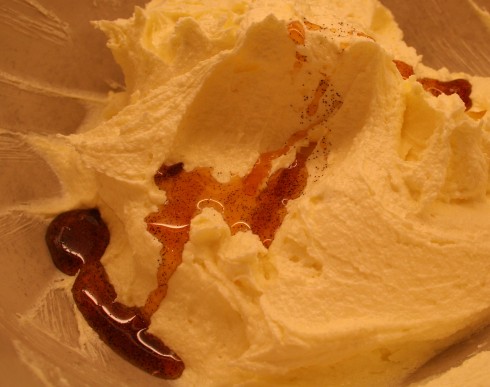 Sift in the flour and fold gently into the mixture. Divide the mixture equally between the two cake tins and spread flat with a spatula.

Bake for 20 to 25 minutes, or until golden brown and when inserted a skewer comes out clean. Allow to cool slightly, then turn out onto a rack to cool completely. 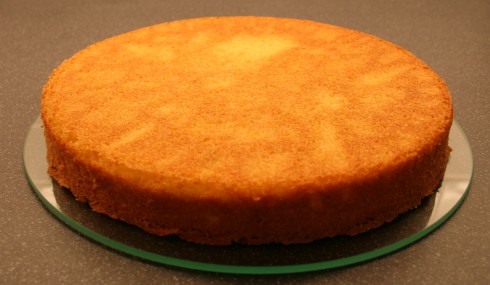 Whip the cream and the vanilla extract until soft peaks form, being careful not to over whip it (although not a disaster, mine was slightly over whipped). Lay one of the layers on a cake plate and spread the jam evenly over it.

Carefully spread the whipped cream on top of the jam. Half the raspberries and layer them onto the cream.

Place the second sponge on top of the raspberries, and dust with icing sugar. Decorate with any left over raspberries – and serve on a beautiful cake stand. 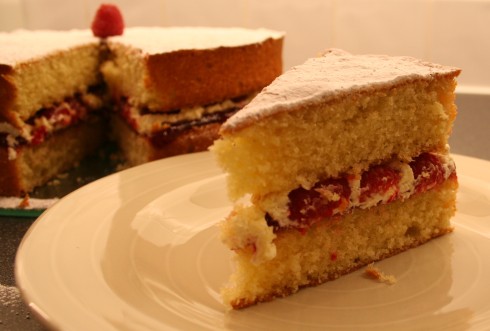 I am a thirty-something professional living and working in London. As a child I envisioned my life sprawl starting with half a decade of intense work and a glittering career, firmly followed by marriage, children and a life as a blissful housewife, passionate cook and writer. Now in my thirties I wonder how my plan fell apart? And so now my days are spent staring deligently at an office computer whilst my mind runs rampant inventing new recipes, dreaming of a way to become a trendy housewife in an age where it's no longer fashionable - as I long to lose the nine-to-five. END_OF_DOCUMENT_TOKEN_TO_BE_REPLACED
This entry was posted on Tuesday, June 5th, 2012 at 17:42 and tagged with cream, jam, raspberries, raspberry jam, sponge and posted in cake, celebration baking, fruit. You can follow any responses to this entry through the RSS 2.0 feed.
« chocolate & marshmallow meringue cake
baked strawberries & cream scones »